HEAD OF DEPARTMENTS FACULTY OF PHARMACY 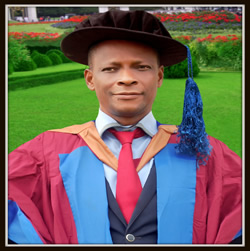 He attended Community Primary School PeterSide, Bonny from 1978 to 1984. Between 1984 and 1990 he attended Bonny National Grammar School (B. N. G. S), Bonny for his Secondary education.

In 1992 he proceeded to the Rivers State School of Arts and Science, (now Rivers State Polytechnic, Port Harcourt) for the IJMB A’ Level Program, and in 1994 he gained admission to study Geography at University of Port Harcourt and graduated in 1998.

He did his Industrial Training (IT), with the Rivers State Ministry of Agriculture and Natural Resources, Port Harcourt in 1997. On completion of his B.Sc. program in 1998, on February 1999 he was posted to Oyo State for the compulsory National Youth Service where he undertook his NYSC Orientation at the Iseyin Camp.

He redeployed after orientation to Rivers State where he served in Mobil Producing Nigeria Unlimited, Bonny River Terminal (B. R. T.), Bonny Island as Assistant Coordinator/ Air Dispatcher in the Aviation Unit, Logistics Department.
On completion of his National Service in 2000, he preceded again to the University of Port Harcourt, Port Harcourt for the Master of Science (M.Sc.) program in the Department of Geography and Environmental Management and obtained his Master of Science degree in Climatology in 2002.

In 2004 he enrolled for the Doctorate degree program and bagged his Doctor of Philosophy (Ph.D.) degree in 2008 in Agro-Climatology.

In 2005, in the course of his Doctoral research, the University of Port Harcourt awarded him a Research Teaching Assistant position and in 2007 he was given a Full-time employment as Lecturer II. In October 2010 he was promoted to Lecturer I. During his teaching and lecturing services at the University of Port Harcourt, Dr. Rogers Wilcox served as the Time-Table Officer between 2007 and 2012; Postgraduate Seminar Coordinator, 2008 to 2012, and Member, Faculty of Social Sciences Postgraduate Seminar Committee, 2008 to 2012.

Since assumption of duty in the University of Uyo, Dr. Rogers Wilcox has occupied several offices and positions. He was appointed Undergraduate Project Coordinator, 2012 to 2014; Member, Academic Board of the Clement Isong Centre for Development Studies, 2013 to date; Field Course Coordinator in 2014 to 2018;Member, Curriculum Committee for the development of Syllabus for the Joint Universities Preliminary Examination Board (JUPEB), 2014; Examinations Officer, in 2014 to 2018; Acting Head of Department 2018 to date. In May 2019, he was appointed Vice-Dean of the Faculty of Social Sciences, and Chairman, Examination Misconduct Panel.

He was an ad-hoc staff to the National Population Commission as Enumeration Area Demarcator for the 2006 Building and Population Census in 2004, Coordinator for the 2006 National Population Census, and Supervisor for the 2006 Post Enumeration Survey, among others
Dr. Rogers Wilcox is a Member of many professional bodies locally and abroad, including- Environmental Management Association of Nigeria (EMAN), Nigerian Meteorological Association, Nigeria Environmental Society, Association of Nigerian Geographers, Royal Geographical Society (London), Climate Reality Project, Food and Trees for Africa, Citizens Climate Lobby, amongst others.
Dr. Rogers Wilcox is married to his only wife, Mrs. Universe-Star Nengi Rogers Wilcox, and the marriage is blessed with four children (all boys): Ronald Ibifiri Wilcox, Reagan Ibialabo Wilcox, Rogers Ibifubara Wilcox, and Richard Ibinabo Wilcox.

Dr. Rogers Wilcox had so many awards to his credit including: Brain Match Award, Cardbury Foods PLC, 1990; Uyo Talent Hunt, Distinguished Leader Award, TSJ and Directorate of Social, SUG, University of Uyo in 2016; Mentorship/ Leadership Award by the Students Union Government (SUG), University of Uyo 2016 in recognition of his passion for Mentoring the Youth, Certificate of Recognition for Planting of Trees in Alexandra Township, Gauteng, South Africa in contribution towards a greener, more sustainable and lower carbon in South Africa by Food and Trees for Africa in 2014.

Dr. Rogers Wilcox has passion for reading, travels, singing and listening to classical music, and farming. He has a small farm where he demonstrates his farming skills to encourage the youths.