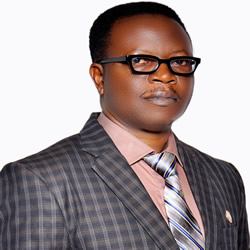 He did his postgraduate Residency training with the National Postgraduate Medical College and became a Fellow of Medical College of Pathologists subspecialty, Medical Microbiology and Parasitology (FMCPath (Med. Micro. and Para.) in 2007.

He is also a Fellow of the College of Pathologist of East Central and Southern Africa (FCPath ECSA) since 2016.
He started his job career with the General Hospital (now Federal Medical Center), Makurdi, Benue State as a House Officer; then African Petroleum Medical Center, Ijora, Lagos, as a Medical officer before proceeding for his postgraduate studies/Residency programme at the University of Lagos/ Lagos University Teaching hospital respectively.

He was also formerly the Laboratory Medicine Examination Coordinator.
He has 35 Publications in Local and International Journals; supervised many M.Sc and Part II Fellowship Research Projects and has attended many conferences.

He is married with children and loves listening to music, traveling and reading.